I contributed to the Wayne Literary Review from the memoir L-Town Elegy: 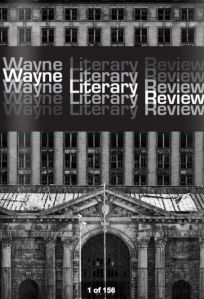 I offer this as memoir but with necessary adjustments and embellishments as memory is fluid, a living thing, until we die and take it with us. Mostly, however, it’s an elegy, which implies the author learns something about the mysteries of life and its dim conclusion through the death of another. I didn’t learn much more about the truth of death when my childhood friend Jay Buck was killed fighting in an Atlanta parking lot at a 2000 Halloween party by a squatter punk named Jimmy Skaggs (foot goes up, boot hits face, Jay goes down), but life certainly did change shape. Death is an inscrutable study and conclusions about it are as fleeting as the raw materials of life: a full belly, a good sleep, an orgasm.

The elegy is an ancient form dating back to my blood ancestors, the Greeks, and continued on through time by my English-language ancestors, guys like John Milton, in Lycidas, and Shelley, who wrote Adonais as an elegy to John Keats who died at 26, not much older than Jay when he was snuffed out. Those two mourned the lives of other poets, and while Jay Buck could barely spell, he lived life like a manic poem he was authoring on the fly, skateboard beneath him, coasting down the street like a mad prophet. My aim is to give chase, try to toss the lasso of language around a life of blurry action. Just as it was when we were kids, I am always trying to catch up

Here’s a link to the read the whole journal online.